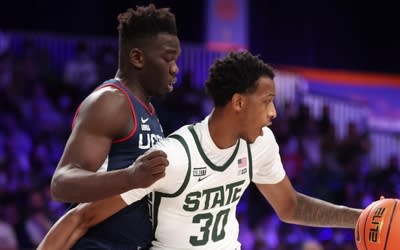 Gabe Brown scored 16 points for the Spartans (5-1), who blew a 14-point lead before halftime and shot just 32% after the break.

But Michigan State did enough to take back momentum after the Huskies had gone up 60-55 with 1:41 left and finally secure a spot in Friday’s championship game.

It was another tense finish for both teams after their first-round games had plenty of late-game drama — including two extra periods for the Huskies in a draining 115-109 win against No. 19 Auburn. But Michigan State’s defense came up with multiple critical stops late, holding the Huskies to 1-for-9 shooting in the final 3 minutes.

The final one came with the Huskies (5-1) getting a chance to tie. But after a long stretch of dribbling, Jalen Gaffney managed to fire up a tough straightaway 3 that fell short of everything.

Adama Sonogo had 18 points and 10 rebounds to lead the Huskies, while Tyrese Martin added 16 points and 12 boards despite being uncertain to play because of a sprained left wrist suffered in the Auburn win.

UConn: Wednesday’s 115-109 win against the Tigers was a March-esque thriller, but regrouping from it to play again in less than 24 hours was a major challenge. It didn’t help that UConn didn’t have forward Isaiah Whaley, who sat out after fainting briefly following a 43-minute effort in the Auburn game. UConn missed 15 of its first 18 shots, then recovered to go up seven with 4:44 left before fading late.

Michigan State: Things weren’t easy for the Spartans in the first round, either. They needed an alley-oop dunk by Marcus Bingham Jr. with 3.4 seconds left to beat Loyola Chicago. This time, they overcame a blown lead and then a surge from the Huskies for another tight win against an NCAA Tournament team from last season.

UConn: The Huskies will play in Friday’s third-place game against the VCU-Baylor loser.