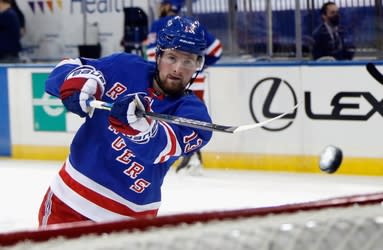 Alexis Lafreniere may only be 20 years old, but he wasn’t afraid to go after an eight-year veteran on Wednesday.

JG Pageau hit Ryan Lindgren in the third period, a hit that Lafreniere took offense to.

Alas, it was the first fight of the former No. 1 pick’s career.

“I thought it was a little high and I didn’t like it so I kind of went at him…” he told reporters on Thursday. “You don’t get the chance to think about it too much. You just go.”

It was no Ali-Frazier, but the scrap turned the heads of some of his teammates.

“It’s like we’re in the movie Interstellar, a parallel universe, I don’t know what was going on,” team enforcer Ryan Reaves said after the game.

Lafreniere joked that he has to work on his fighting skills, but Reaves did say it’s a win because “he didn’t get punched.”